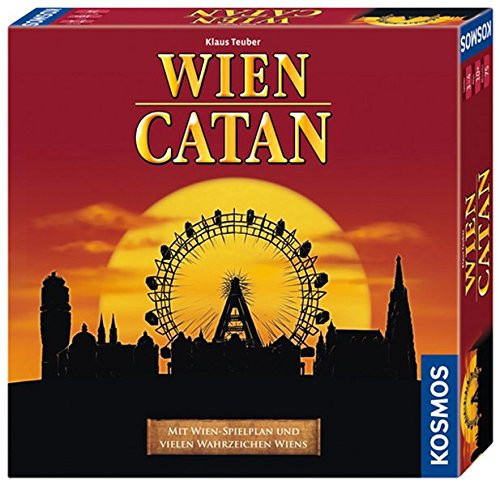 With this limited edition, the Austrian metropolis can now be settled.

The game plan shows Vienna and its surroundings in Catanian hexagon format. Not only roads have to be built here, but also famous sights like the Giant Ferris Wheel or St. Stephen's Cathedral have to be built. 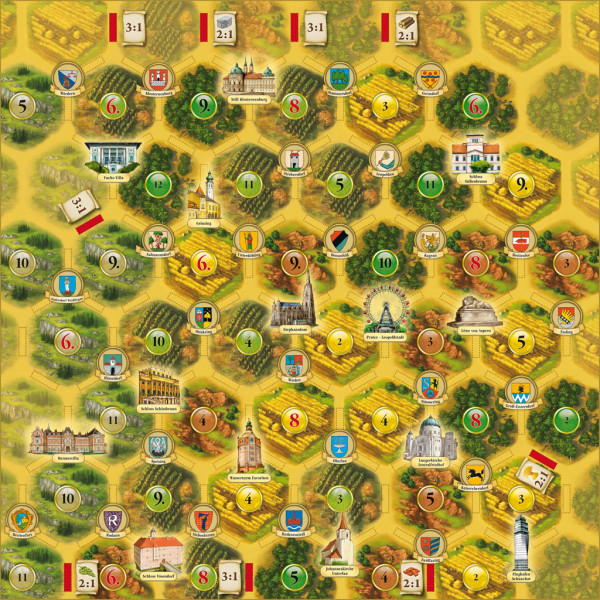 Until 1850, Vienna was about as large as today's 1st district due to the city walls. From 1850, the villages of the Viennese hinterland gradually merged with Vienna to form today's metropolis. The old Vienna was situated in the area of the Stephand Cathedral shown on the map.

The villages are surrounded by forests, fields and vineyards where wood is harvested, grain is harvested and wine is harvested. In the west, in the mountainous Wienerwald, stone is mined and clay mining is also documented for the surrounding area of Vienna.

Like the settlers of the Middle Ages, they founded settlements on the village fields (fields with coats of arms), built roads and built part of the many Viennese landmarks. The construction of roads, settlements and landmarks costs raw materials.

It's your turn to roll two dice. Each player will now receive a resource of this landscape for each settlement he has on a landscape with the number rolled. Thus the hilly country supplies loam, the forest wood, the mountains stone, the farmland grain and the vineyards grapes. Anyone who has come across clay and wood in this way can build roads to a neighbouring village field and then build another settlement there for every 1 clay, 1 wood, 1 grain and 1 wine.

If you have rolled a "7", you may move the robber, who will then block the production of the landscape on which you placed him, to the chagrin of your fellow players.

You do not always have the raw materials required for construction. And so the barter trade dominates the events: Stone for wine, clay for wood - is exchanged completely after the current building projects.

If you build a landmark for 2 stones and 1 grain, place a cardboard figure with the illustration of the landmark on the corresponding landmark field of the board. You will receive an associated card that counts for 1 victory point and gives you an advantage. As the builder of the Luegerkirche, for example, you may immediately use a road free of charge.

If you buy a development card for 1 stone, 1 wine and 1 grain, you also get a game advantage. For example, you can move the robber with a card from a vigilante's militia or demand 2 resource cards of a certain type from each player with the card from the "Right of defeat".

If you have drawn the card "Richard the Lionheart" from the face-down Development Card deck, you will receive another Victory Point.

What Richard Löwenherz had to do with Vienna can be found in a supplement that informs about the reference of the play material to the history of Vienna.

Every settlement and every landmark counts one victory point. There are also special victory point cards that are given to the player who either has the longest street or has played the most vigilante cards.