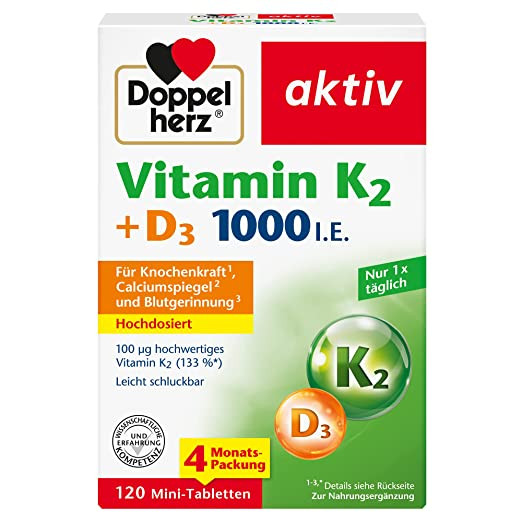 Healthy bones are important at any age because they form the skeleton of our body. In addition to the mineral calcium, vitamin D and vitamin K also play an important role in bone maintenance.

The high-dose tablets of Doppelherz Vitamin K2 + D3 2000 I.U. are recommended for people who want to ensure their supply of the "sun vitamin" vitamin D. 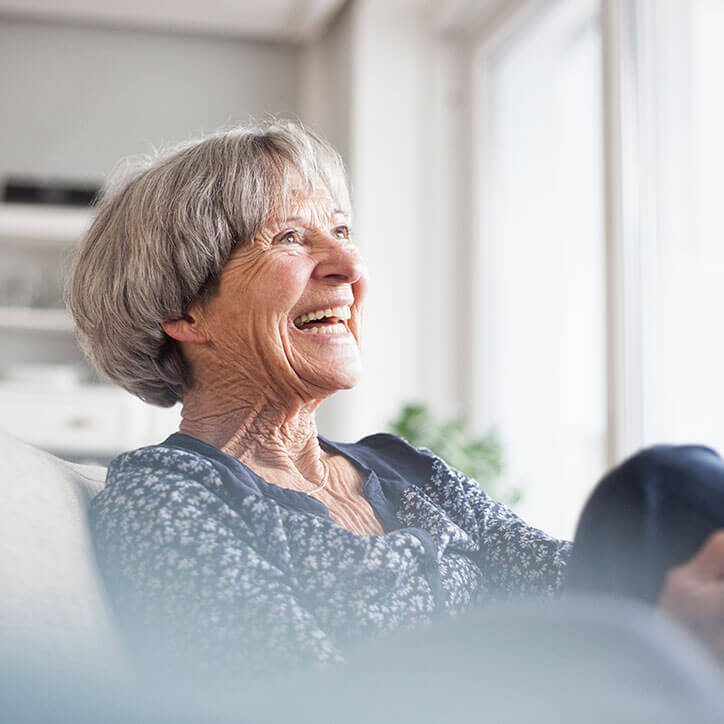 The easy-to-swallow mini tablet from Doppelherz contains 100 μg vitamin K in the form of menaquinone (MK-7). This is a high-quality vitamin K2 and can be easily absorbed by the human body. In addition, the mini tablet contains 50 μg of vitamin D, which is equivalent to 2000 I.U. (International Units).

Our immune system, like all organs and cells of our body, depends on nutrients to perform at its best at all times. Along with vitamin C, vitamin D has made a name for itself here because it supports the normal function of the immune system.

We absorb vitamin D in part by eating foods such as fish, eggs and dairy products. But our bodies can make vitamin D on their own through the influence of enough sunlight on our skin. However, the sun rarely appears in the autumn and winter months.

However, vitamin D is also coming more and more into focus in connection with bone health: It supports the normal absorption of calcium and the normal calcium level in the blood and thus contributes to the maintenance of normal bones.

Like vitamin D, vitamin K plays a role in numerous bodily functions. It has long been known that vitamin K contributes to normal blood clotting. This is why the vitamin also bears its name: "K" for coagulation (clotting).

Another role of vitamin K is in bone health. By supporting the mineralization of the skeleton, vitamin K, like vitamin D, contributes to the maintenance of normal bones.

In turn, vitamin K2 can be divided into several variants, for example MK-4, MK-5 or MK-7, whose number of chemical side chains is different.
These variants differ from each other both in biological activity and bioavailability, with MK-4, for example, being very poorly absorbed in the intestine.

The vitamin K2 MK-7 used by Doppelherz is considered the best-known variant and is well absorbed by the human body.

Vitamin K1 and K2 in food

The fat-soluble "vitamin K" is not a single vitamin, but occurs in nature in the form of vitamin K1 (phylloquinine) and the group of K2 vitamins (menaquinones, abbreviated MK).

Vitamin K1 is mainly found in green plants such as lettuce or cabbage, where it plays a decisive role in photosynthesis.

Vitamin K2 is also known as "bacterial vitamin K" because it is produced by microorganisms. On the one hand, it can be produced in small quantities by intestinal bacteria themselves and transported into the blood. However, it is assumed that this self-production is not sufficient.

On the other hand, animal and bacterially fermented foods are considered sources of vitamin K2, but the content is usually not particularly high.
The decisive factor for the vitamin K content of fermented foods, e.g. yogurt, cheese or sauerkraut, is which bacterial strains are used for preservation.
Incidentally, Natto, a fermented soybean product from Japan that is hardly known in Germany, is probably the food with the highest vitamin K2 content. 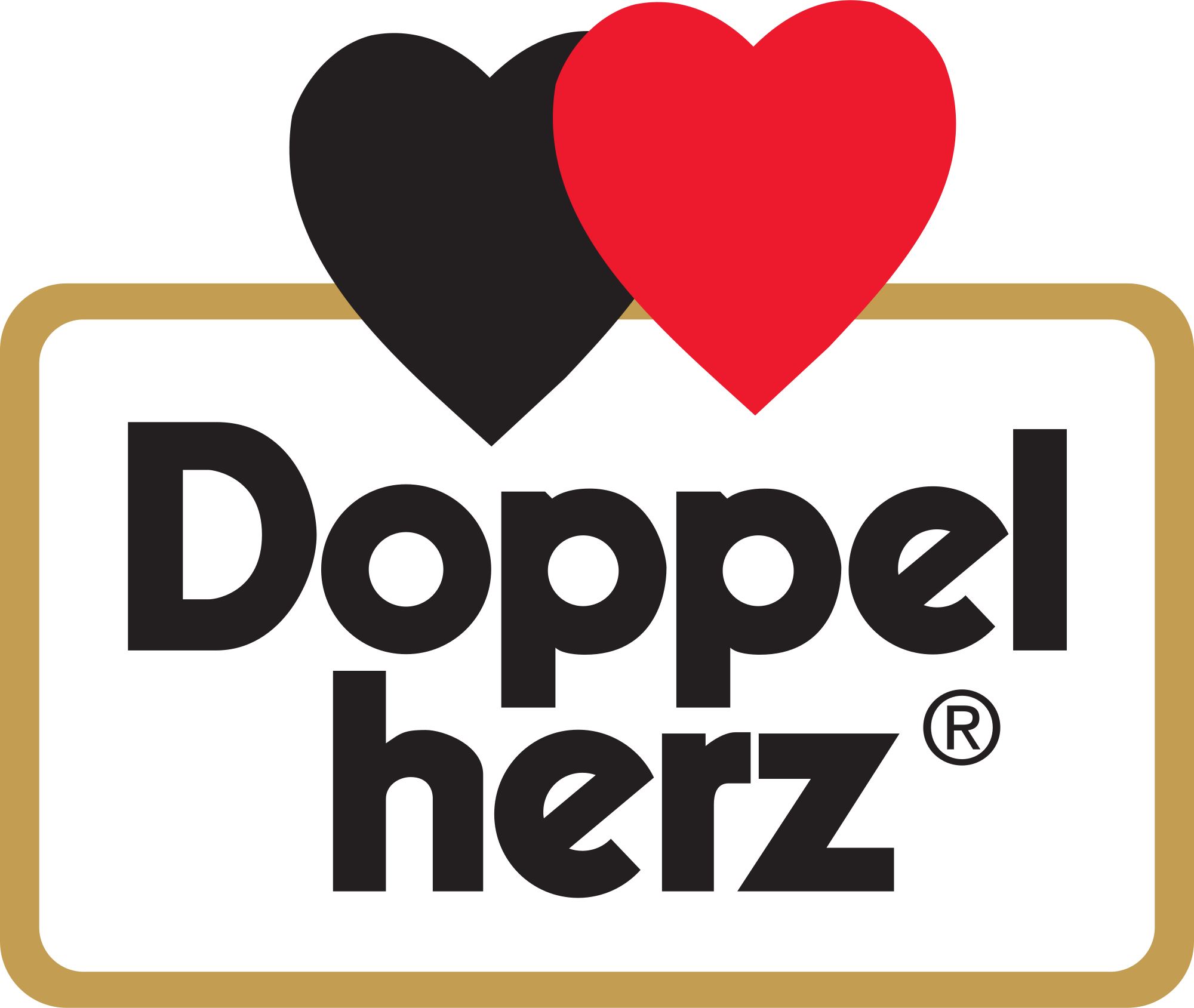 Queisser Pharma stands for healthy life and holistic well-being. As one of the leading German pharmaceutical companies, we can look back on more than 100 years of company history. At our headquarters in Flensburg, we develop, produce and market a wide range of selected products for the preservation and maintenance of health. Whether pharmaceuticals, medical devices, nutritional supplements or cosmetics - our range consists of high quality products.

Each and every employee personally stands for the quality level of the products of Queisser Pharma. Our customers trust our products. This trust is based on the supply of high-quality, needs-oriented products.

Our task is to meet the demands of our customers for quality every day anew.

The focus of our activities in Germany and abroad are high-quality products for the preservation of health.

Queisser Pharma sells a wide range of over-the-counter medicines and dietary supplements under the Doppelherz  brand  . The products are sold in Germany in the pharmacy, in drugstores as well as the food retail trade.

In recent years, the product range has been steadily expanded to include innovative products, including the development of a wide range of vitamin and mineral preparations, which are characterized by ever new and intelligent compositions. Every day, customers opt for the company's quality products and make Doppelherz products one of the best-selling nutritional supplements in Germany.

The company history of Queisser Pharma

The company Queisser Pharma can look back on more than 100 years of company history. Comprehensive knowledge about health has a long tradition here.

The history of Queisser Pharma begins in 1897 in a small pharmaceutical factory in Hamburg. The graduate pharmacist Alfred Queisser had come from Lusatia in the district of Dresden to Hamburg to make his fortune as a manufacturer. He focused on the production of health and care products such as creams, liquid soap and toothpaste. Despite difficult circumstances, Alfred Queisser managed to continuously expand the company. He owed this to his extensive talents as a businessman, scientist and imaginative advertising expert, whom he united in one person.

The second root of today's Queisser Pharma was created by the Essen pharmacist Josef Peter Hennes. In 1919, he developed the original formula of today's Doppelherz® energy tonic from herbs and other natural ingredients. The tonic was produced and successfully marketed in the eponymous company founded by him.

Both houses eventually merged into "Queisser Pharma", which has been part of HGDF Familienholding Ltd. since the end of the 1970s. & Co. KG, a long-established Flensburg family business, whose parent company was founded in 1738 in Flensburg.

Since 1987, Queisser Pharma has its headquarters in Flensburg in the former production areas of a Rumherstellung. In addition to other brand products from Queisser, about 1 million liters of Doppelherz energy tonic are produced, bottled, packed and shipped in line with the market.

Queisser Pharma is guided by tradition and at the same time modern - with much grown experience and specialist knowledge, modern and innovative health products are regularly created.

Demand for health products has been increasing for many decades. Our headquarters in Flensburg has therefore been continuously adapted and expanded to meet the steadily growing popularity. Here many of our products are manufactured, packed and shipped in modern production lines. From Flensburg the products reach all over Germany and all over the world. To date, we have grown to about 300 employees. This makes Queisser Pharma one of the biggest employers in the city of Flensburg. 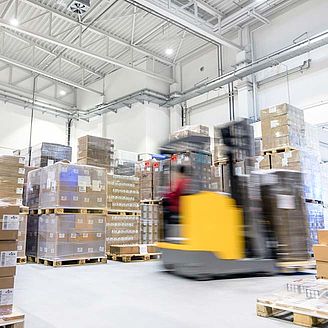 The future of Queisser Pharma

The market for health is constantly changing. Health is becoming more and more important for every individual as well as for the social institutions.

The self-responsibility for the health increases as well as the consciousness to be able to influence the health and their continuance actively and independently. Increasing life expectancy and the rising share of older people are setting new trends and presenting the healthcare industry with new challenges. For a company involved in health products, there are great opportunities for the future.

A modern medium-sized company like Queisser Pharma must actively change in this fast-paced world. A change that is characterized by major market changes, which are caused not least by the demographic development of the population structure in all countries of the world.

Never before have so many people become so old, while at the same time remaining so young, healthy and actively involved in social life. The proportion of over-60s to 100 people between the ages of 20 and 60 will almost double by 2030. In 2050, 78 out of 100 people will be over 60 years old.

Life expectancy increases from generation to generation. Even today, the sixty-year-olds can look forward to more than 20 more years of life. With age, there is an interesting trend towards active health care, prophylaxis and personal responsibility. Clearly recognizable is the endeavor to provide your body with everything necessary to achieve a strong and active old age. People know that they can not leave their health today alone to the doctors. They have to take their health into their own hands and act on their own initiative and responsibility.

(100+)
Herbaria Bloodquick for iron and vitamin needs, 500ml
Content as of each 0.5 l (€35.90 * / 1 l)
From €17.95 * more options available
Customers also bought
Customers also viewed
Products for your health
Products of the brand Doppelherz
for the immune system
for muscles and bones
Viewed
This website uses cookies, which are necessary for the technical operation of the website and are always set. Other cookies, which increase the usability of this website, serve for direct advertising or simplify interaction with other websites and social networks, will only be used with your consent. More information
Decline Accept all Configure